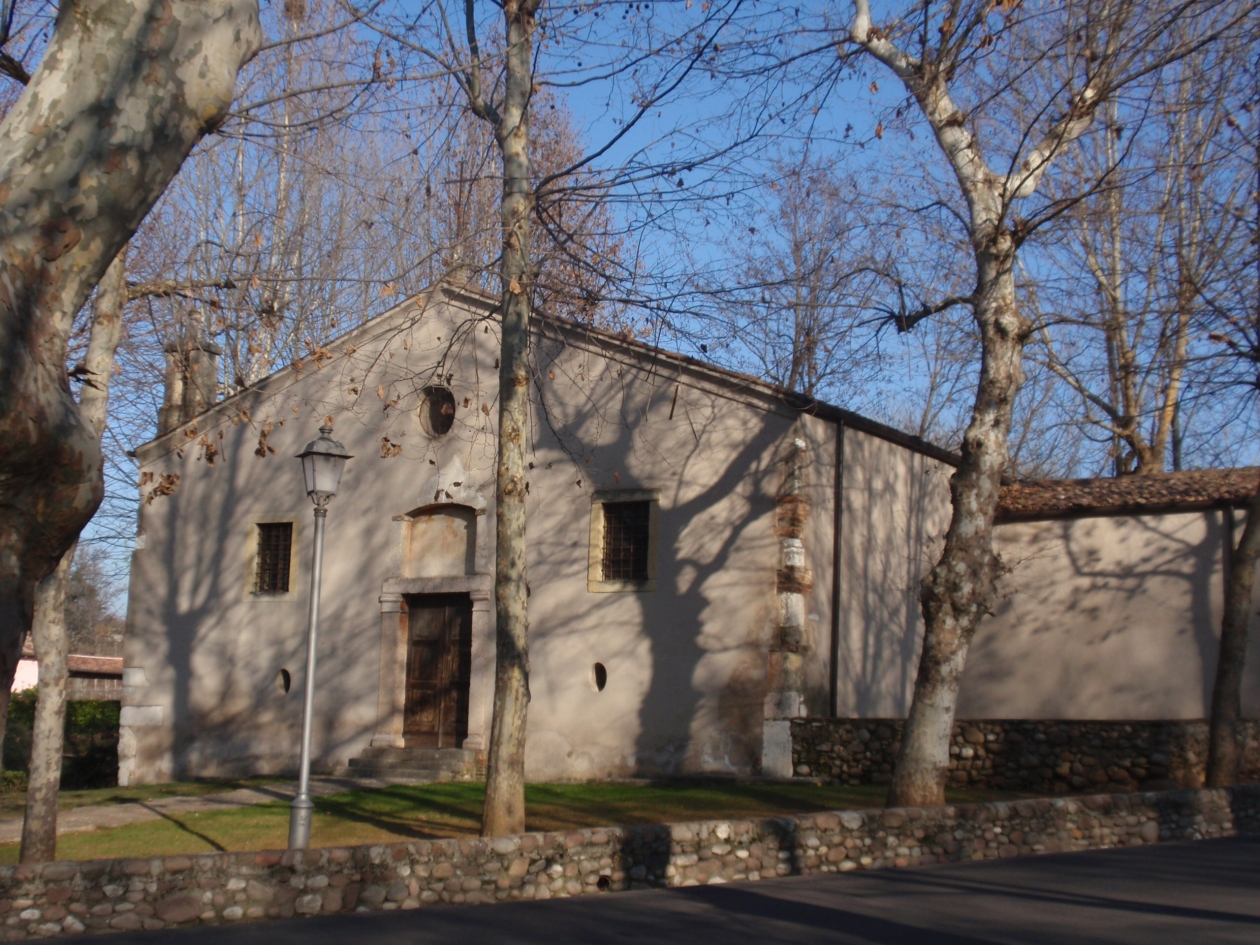 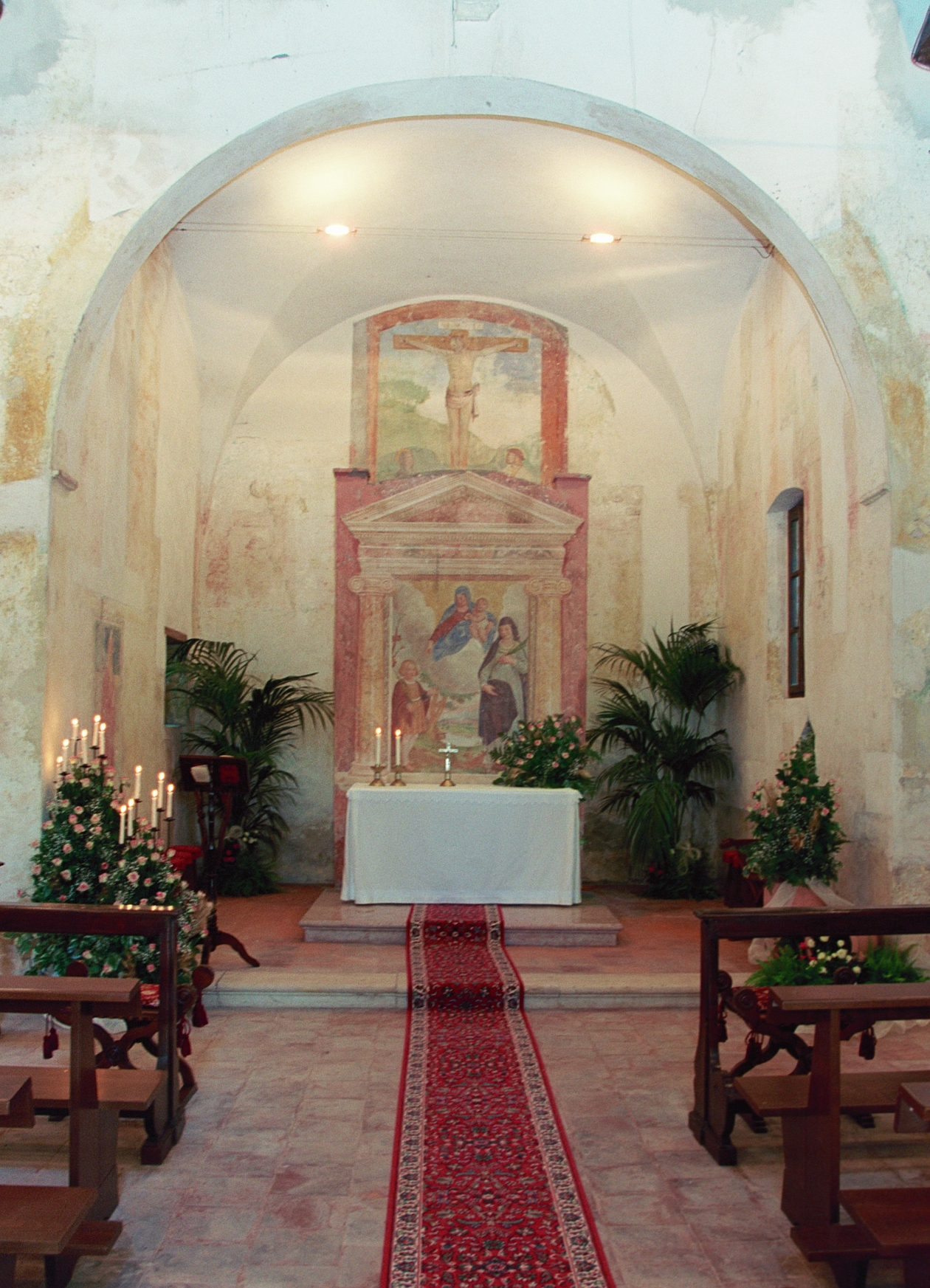 The small church is dedicated to San Quirico and Giulitta ‘s mother, martyred in 304 during the persecution ordered by the Emperor Diocletian.

The origins of the building date back to the fifteenth century; the oldest records concerning him or her tell us that it was a possession of the priestly order of the Dominicans, who used it as a hospital during the plague of 1630. The witness also the unusual oval windows on the facade, used to feed the lepers who were kept isolated from the rest of the population.

The visitor the rustic facade has a portal crafted stone surmounted by a capital with a tempera painting that depicts St. Quirinus, a picture today but quite faded. Two rectangular windows, louvers and grilles with a tiny rosette complement the simple yet sober architecture of the small complex, which is endowed with a small sail-shaped bells bed positioned on the roof, to the left of the front door.

The interior, which comes with a single nave, is extremely simple; over the nave, a simple rectangular apse and on the wall to the right, a door leads to the small sacristy.

On the wall to the right is a fragmentary painting from the XVII – XVIII century by an unknown author, while the left is a fresco depicting Saint Peter along with the Saints Mary Magdalene, Anthony the Abbot, Quirico and John the Baptist. To the left of the chancel there is a fresco depicting a female figure set in a triple frame of the altarpiece of the time.

The fresco of the Crucifixion valuable in the bottom wall, rediscovered towards the beginning of the nineteenth century is the most important of the whole church, and has been attributed to the school of Liberale from Verona; his visit is now partially covered by a kiosk classical added in the eighteenth century, in which there is a painting of a Madonna and Child with Saints Quirino and Giulitta.

On the floor of the wooden furniture are a confessional and a lectern from nineteenth century as well as a kneeler.

Two simple water bowls, both in stone: one on the right wall, the other on the counter. Finally, it should be born in mind a fragment of carved stone representing a lamb in profile and a stylized palm, inserted in the wall under the roof. You probably work, as the fragments in the parish of Palazzolo di Sona, decorations Lombard church of Santa Giustina, which is now within the perimeter of the cemetery of this village, one of those signs missing, unfortunately wreck of a great ancient cultural shipwreck.

From Verona and Peschiera del Garda along the regional road. 11, near the village of Bosco di Sona, at the traffic lights take the direction for Sona. Continuing along the road uphill, the church of San Quirico is located halfway up the hill on your left.

Motorway A4 Milano Venezia: exit at Sommacampagna, left at the roundabout towards Sona / Bussolengo. At the next roundabout, turn left in the direction of the village of Sona until the end of the climb, where the City Hall and the main square – Piazza della Vittoria. Go straight for the main direction and after about 2 km, past the building of schools, the church of San Quirico is on the way down to your right.

Free Admission but it needs contatc the Public Library